I've been twiddling with my thumbs for a while now trying to figure out how I should get back at Kate.  But everything that comes into my head I have to quickly dismiss with an 'oops, already used that revenge plan' or 'no, Jamie will certainly never forgive me for that if he found out'.
The difference this time around is that there is no way on earth that Jamie can find out about this.  His words always echo in my head, and I should do the right thing and be a grown-up about this - but I cannot.
Kate has been a vile infection for a while now and I cannot ignore it any longer.  This time, I have to get rid of it for good.
"So, what's the latest plan?" Mikey says as he sits down next to me in the library.
I look down at my messy scribbles and try to make out the hateful thoughts I have written.
But nothing makes sense and out of pure frustration I scrunch up the piece of paper into a tight ball and flick it to the other side of the table.  It stops at the edge and stares at me as if mocking my brain's failed attempt at revenge.
"Maybe you should take this as a sign to let things be," Mikey very unhelpfully suggests.
I glare at him for a couple of seconds before my head falls ever so elegantly in my hands and I grunt in irritation.
I hear a loud shushing noise coming from the librarians, which I ignore completely and carry on,
"It's been a week and I haven't thought of anything!  What's wrong with me?"
"Well, quite a few things actually," he attempts a smile.
I turn towards Mikey with big, brown eyes as if pleading for his help.
"I can't let her get away with all this.  Jamie doesn't understand because he doesn't see the way she looks at me or the things she says.  I'm tired of having someone watching my every move.  I hate that my relationship is so cloudy because that awful excuse of a human being cannot let things go,"  I take in a deep breath and try to stop my emotions from getting too carried away.  The last thing I need right now is to cry in front of all these people.  I'm wearing Benefit BadGal mascara, for goodness' sake.  What a waste of money crying would be.
Mikey pats me on the shoulder.  Sympathetically, he smiles and grabs the scrunched up ball of paper.
"Let's go over some of these, shall we?  There might be a diamond amongst all this roughness," 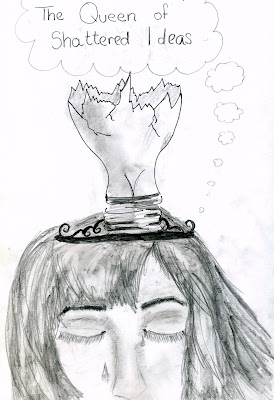