(Continuation of Much To Do About Nothing)

I keep getting phone calls.  Odd ones, where no one says anything.  A bit like in a scary movie, right before the pretty girl is killed.  And unfortunately, in this little story, the pretty girl must be me.
Oh, hang on.  I've just risen from bed and looked at myself in the mirror... I should be safe for a few more scenes.

This is the last week of the Easter holidays before exams start, and instead of being halfway through Chapter 16 and knowing all there is to know about oligopolies, I'm about to head out to work; to the Witch's Corner to most likely stir a cauldron...or hassle people to sign up to a store card - pretty much the same thing.
It's the perfect time to revise.  Jo and the rest of the housemates have gone home for the holidays so the entire place is all mine.
But no.
Here I am, putting on the same dress I've been wearing to work for the last month, because Mel won't allow me to use my 75% off on uniform anymore.  And yet, she's always wearing something new.  The bitch!

"Late again!" Mel hisses as I push open the glass double doors.
It's 9:15 - I shouldn't even be here until 9:30.
"Actually, I'm early," I retort.
"I asked you to come in at nine because we're short-staffed today.  Ergh!  Does no one listen to me anymore?"
I don't think anyone did in the first place.
"You might as well go and get Henry," she places both hands on her hips and starts tapping her right foot at me.
Henry?  Who's Henry?  Does she have a child I don't know about?  Have her and the Merchandiser Dude spawned?
So I stand there looking dumb, waiting for her to explain.
"The hoover?"  she impatiently clarifies.
You could have just said that, you lunatic!

Hoovering is a nightmare.  There's only one plug socket tucked away behind a rail of heavy dresses and each morning I stand there wrestling with the clothes, trying to get my job done.  What's more is that Henry has pretty much had it.  Its long lead is covered with brown sellotape trying to keep us from getting electrocuted, and as you try to hoover up even the lightest of dust, it spits at you.  You have no idea the amount of times I've ruined clothes with that temperamental thing.  It's because of this, that 'Henry' is the least envied morning task.  One of the reasons why the other girls are always so late - in this instance, the early bird does not catch the worm.
"Hoover the changing rooms," Mel shouts above the noise.
So I drag poor, warn-out Henry up the couple of steps, cursing in my head at how cumbersome this whole task is.  The changing rooms don't need to be hoovered - there's barely a square inch in them.
"Come on, you piece of crap," I tell it, as I lift it up the steps.
But Henry is clearly seeking revenge, because the sellotaped lead has wrapped itself around my foot, and as I attempt to climb up a step, I trip and fall on the floor.
Mel doesn't even look up from whatever email she's reading at the till.  So, I just sit there, inelegantly for a bit.  I'll just treat this as my break.
I unwrap the lead from my foot and try to get up, but the floor length mirror opposite the shop doors catches my eye.  My head and body (still on the floor) spin round to see if I'm actually right.
And there, out in the street looking into the shop is Anthony.
Handsome, smart, funny Anthony.
He's smiling at me and with a look of concern, mouths, "Are you alright?"
I only nod my head.  I suppose I feel a bit embarrassed, but at the same time I want him to know just how horrid it is working here.  I almost feel like yelling, "She beats me, Anthony! She beats me!"
He smiles again at me and walks away, and I instantly feel like running after him and saying, "I'm so sorry I said no when you asked me out.  I didn't mean it.  I have no idea what I was thinking,"
But I just sit there on the floor, with my legs crossed, collecting more dust than Henry could.  My black and white dress is probably black and grey by now.
"Oh, do get up!" Mel shouts.  "Get on with the changing rooms!"

For the rest of the day I've been instructed to stand on the shop floor by the doors, asking customers if they need any help.  It's 3:22 - I've asked 49 people so far, and each and every one of them has responded with, "No, thank you.  I'm just browsing," - because, let's face it, it's not that difficult to look at a few dresses and decide whether or not you like them.
But Mel still keeps creeping up on me, pointing to a customer and roaring, "Go and ask her if she needs any help.  Go on,"
"But I already asked her two minutes ago,"
"Go and ask her again!"
So off I'd trot like an idiot and pester the lovely, old woman again.  "No thanks, dear," she'd respond, throwing me a look of concern for my mental health.

From that moment, I swore to myself that I will not talk to another customer again unless they spoke to me first.  From now until 6 o' clock I'd remain silent, standing there looking pretty in my red shoes and my dirty dress.
"Ant, I want to go in here.  You know it's my favourite shop," I hear a girl's voice say at the entrance.
"But, do we have to go in here right now?" the guy speaks.
And, of course, it's obviously Anthony.
Because that's just my luck, isn't it, for the guy I like (whom I stupidly rejected) to swan back into my life with a drop-dead gorgeous girl.  But, let's look on the bright side; she's now the pretty one in this story, so at least she'll die before I do.
I instinctively go to hide, but soon turn around again when I see Mel glaring at me from the till.  Looks like I can't really avoid this one.  Perhaps I'll go hassle that lady again.
"Are you sure you don't require my help?" I tell her, as she stands there holding one of our new coats.
"Err...I'm OK for now," she smiles.
My head moves briefly towards the door.  Anthony catches my eye but doesn't acknowledge me.  Which is fine.  I've pretty much ignored him too.
"We have some other new coats as well," I tell the lady, moving her towards the other end of the shop.
"I've decided on this one," she tells me, standing her ground (and good on her).
"OK, I'll take this to the till for you,"
"That's very kind of you, but I'd like to have another look around,"
"Oh, well, let me help you with that.  Were you looking for anything in particular?"
Anthony and female friend are rummaging through a few dresses.  I scan my surrounding and wonder whether anyone will notice if I run home.
"I'm fine, dear," the lady says curtly.  There's not much point trying again unless I want to be arrested.
I move back to my little spot and stand there with my back to them.  A part of me longs for them to come and speak to me, but the other part is saying, "Don't talk to me, don't even look at me!"
"I'll ask this girl for help," Anthony's friend says.  "Excuse me," the girl leans in.  "I need a dress for a party tonight.  Which is your most popular one?"
I smile at her and walk her over to the newest addition of clothes.  "Everyone seems to adore this one," I say, pointing to a light pink, strapless mini dress.  Anthony joins us a few seconds later.
"What do you think, Ant?  Wouldn't I look absolutely gorgeous next to you in this little number?" she says, flicking her long, blonde hair.
"Yes.  Hi," he finally says to me.
"Hi," I respond quietly.
"Oh.  Do you two know each other?"
"Yes.  This is Ella," Anthony replies, in a way which indicates he has spoken about me to this girl before.
"Oh," is her response, which definitely confirms that he has spoken about me to this girl before.
"Ella, this is Chloe.  We've been seeing each other these last couple of weeks," he says, almost shyly.
"Lovely to meet you," I say, and she smiles back, despite the horrific awkwardness of this entire situation.
"Actually, I'm not sure I want this dress," Chloe says, scrunching her face at Anthony.  "Maybe we should go somewhere else first.  It's better to have a look around,"
Awkward!  Awkward!  Awkward!
I nod my head and keep my eyes fixed on her, but all I want to do is look at Anthony.  I want to ask him how his mind could be changed so quickly, when only a month ago he really liked me.  Fickle!  I don't have time for fickle men.
"Why don't you have a look around on your own?" Anthony asks her.  "I need to pop to the bank quickly anyway," and with that, he's left the shop. 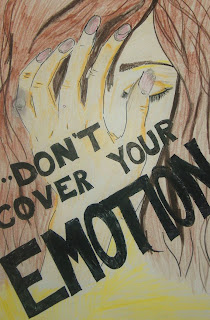 I don't know whether to leave her browse or to stand there watching her look at dresses.  I stupidly choose the latter.
"I've heard a lot about you," she tells me.
My attention perks up.  "Have you?  All good, I hope,"
"All I know is that you're the girl Ant liked before me.  I just don't get it?"
"Umm...you don't get why he liked me?"  Err...isn't that a bit of a nasty thing to say???
"No," she quickly responds, not lifting her eyes from the clothes once, "I just don't understand why he still has your number.  Why he still talks about you,"

"Oh...well....I...umm..." I'm tongue-tied.  What on earth do you say to that?
"It's just weird, that's all.  The two of you didn't even kiss,"  and she finally looks up at me, her blue eyes glazed over like ice, expecting me to confirm.
"We never kissed," I tell her.
"It's difficult to date someone who had strong feelings for someone else only weeks before," she looks back at the clothes, and I instantly feel for her.  This is horribly awkward for me, but it must be dreadful for her.  She looks like she's holding in a lot of feelings that she hasn't shared with Anthony yet.  I've decided I like this girl.
"I phoned you a couple of times," she blurts out.
And now I hate her.
"I wanted to see what you sounded like.  Just how different you were to me," she says, still in a somber tone.
"So, that's why I've been getting phone calls where they hang up instantly?" I'm shocked.  We all get jealous, but you deal with it.  You don't phone strangers and then hang up!
"Sorry," she says, and I honestly think she means it.  "I'm finding it hard," she smiles, says goodbye and leaves.
Today is a strange day.  I've decided.
A minute later, Anthony walks back in.
"Oh, you've just missed her," I tell him.
"I know.  Look, I just wanted to..." he attempts to speak, but stops himself half way.
"Are you OK?" I ask.
"Ella, look, you..." and once more, he stops.  I look up at him, unsure of what to do.  But all he does is smile at me and walk out of the shop.
Again.
Like he always does.
He needs to stop doing that!
Posted by Unknown at 2:52 pm