The Liar, the Bitch and the Wardrobe

I'm sitting in a taxi on the way to the Palace Theatre and I wonder just how fast things are moving with Malcolm.  Today we'd have been seeing each other for exactly three weeks, and here I am in a black cab with him holding my hand as we head to the theatre to meet his group of best friends.
"It's too soon," I whisper to myself as I stare out at cloudy London as it gets ready for dusk.
"Did you say something?" he responds, stroking my hand and staring at me intently with his blue eyes.
"Nope," I lie.

He averts his gaze back to his side of the window and I continue my thought process.
Right, where was I?  Ah yes, it's all too soon.  This is technically our 6th date and already I'm being introduced to his friends as his girlfriend.  Am I over-reacting here or is this all a bit too much?  We haven't even discussed the 'labels' ourselves yet.  I mean, I don't even know which side of the bed he prefers to sleep on.
"Oh well," I tell my brain.  Just enjoy it.  You never know - these people could become lifelong friends.


The cab drops us off at the side of the theatre, and I click clack my heels to the entrance.
I'm nervous.
I'm really nervous.
"Mal!" a female voice yells, and Malcolm straight away dashes towards the trio, still holding on to my hand.  All I remember from that moment is my heavy and glittery French Connection dress swishing to and fro as I'm being dragged to meet his friends.
He drops my hand in an instant as he greets them, and I'm left there behind him like a shy child wondering whether or not to introduce myself.
So I cough.

"Oh, this is Ella.  My girlfriend." he finally says.  Well, at least I know where I stand with him.  It's more than most girls get.  "This is Dan, Melissa and Liz," he states, pointing to them one by one.  "Dan and Melissa are engaged.  To each other, of course.  And, well, Liz is still single,"
"Oi!" Liz reacts and playfully punches him on the arm.

"Lovely to meet you all," I say.  The couple smile back, but Liz has completely ignored my comment.  She's cut me off and has gone straight back to talking to Malcolm.  I'm not stupid; this girl clearly fancies him.
"I love your dress," Melissa says, eyeing up the sewn-on jewels scattered all over the mini dress.
"Thanks.  I wasn't sure on the choice for tonight,"
"So she brought two extra dresses with her," Malcolm unhelpfully inputs.

Melissa laughs, "I did wonder why your bag was so big,"
"You just never know with these events," I tell her.  "You can never be too prepared when it comes to dressing up,"  the couple smile at me, but it's as if I can hear Malcolm roll his eyes as he stands to the side of me.  And Liz?  Well, she's playing about with her phone - probably eBaying a voodoo doll of me.
We head for our seats and I break Malcolm away from the group.
"You and Liz," I coyly begin.  "Is there history between the two of you?"
But he just laughs, and I immediately feel like a paranoid idiot.
"Don't be silly.  We're just really good friends.  Nothing has ever happened between us," and he pulls me closer to kiss me on the cheek. 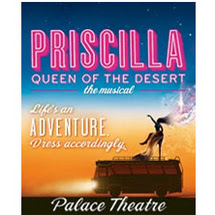 Priscilla, Queen of the Desert.
I'm staring at the stage in awe as the vibrant colours glimmer.  I'm taken aback by the outfits and I cannot believe that I have never seen this musical before.  Where on earth have I been these last twenty-two years?  Clearly, I've been wasting my time watching Blood Brothers.
The only thing that's ruining it is Liz. Every now and again she leans over me to talk to Malcolm.  I'm seconds away from tapping the shoulder of the bald man in front of me and asking if we can swap seats.  But he seems quite large - I don't think he'll manage the leap.
"Shh," I say, trying to make it come across jokingly.  "He's singing a Kylie song.  Have some respect for one of our pop princesses," but whilst Malcolm has shifted his eyes to the stage, Liz is still carrying on.
"Want to come to Australia with me and Tess?" she asks.
Tess?  Who's Tess?  And did this lunatic just invite my boyfriend on holiday with her when I'm right there???
"I'll think about it," Malcolm responds.
No, you bloody won't think about it!
"You'll only regret it if you say no..." she reaches out and tries to tickle him.  He's not a five year old girl, nor a dog, Elizabeth!
"Maybe," Malcolm tells her.
"That'll be a yes then," she smiles so broadly, I'm pretty sure I can fit three whole apples in her mouth.
Actually, if he knows what's good for him, that was a definite no.
I try to ignore her, but I find I can't.  I'm not too sure how comfortable I feel with my new boyfriend being such good friends with a girl who's deeply in love with him.  It's unsettling - I'm sure you'd all agree.  It's as if I'm reading into every little word she mouths, every action she takes, and all I want to say to her is, "Liz, darling, give up now.  Just go outside and walk out into oncoming traffic, OK?"

"We'll go and get the drinks," Liz says standing up from her seat at intermission with Dan.
Finally!  I get five whole minutes without her flirting with my boyfriend.
"I'll help you carry them," Malcolm says.
Err...
"Your shoes are really lovely as well," Melissa tells me as she leans over her seat.
But my eyes are still glued to Malcolm who is now holding on to Liz's elbow and heading out of the doors.  "Huh?  Oh, yeah, they're new," I tell her.  "Slightly painful though.  Probably won't wear them again after tonight,"
She lets out a gasp, " You must have a killer wardrobe,"
I beam with pride as I think of all my clothes.  Most of them unworn with the price tag still on them, but still, Gok Wan would approve of it, and that's the main thing.
"I'd love to buy stuff like that," Melissa continues, staring at my shoes like an orphan longing after their parents.  "Dan and I are on a tight budget now that we've decided to get married,"
"When's the big day?"
"August," she sighs.  And not in a 'I'm so in love with my fiance' way.
"Getting close,"
"Mm,"
Awkward!
"I've got everyone wine," Liz's voice thankfully interrupts.
"Have you misplaced my boyfriend?" I ask her when I notice that Malcolm is not with her.  She throws me a sickly smile and says,
"He's just gone to the little boy's room.  Will be back by your side shortly.  Here's your drink," I reach out to grab the little, plastic cup, but Liz has already dropped it.
All over my lap.
"Oops," she says, covering her mouth with faux-shock.
Oops indeed!  She did that on purpose.  I've seen Benny Hill sketches that are more subtle.
"I'm so sorry!" she says out loud when Malcolm is back in view.
Wait, did she just smirk???
"And that's why I carry around two other dresses," I tell them and make my way to the bathroom.
"I'll come with you," Melissa tells me sympathetically.
I know I sound pathetic, but it's one of those moments where I just want to cry.  I want to make my excuses and head home, eat a bar of Galaxy and watch Eastenders.
How can Malcolm be so stupid and not notice what Liz is doing?  Ergh!  I honestly hate how dumb guys are sometimes when it comes to other girls.  It's as if they only respond to flirtation and nothing else.
"She did that on purpose," I tell Melissa, knowing full well how awful it sounds.
But shockingly she replies with, "I know!"  I look over at her wanting more information, but she seems reluctant to give anything else.
"She clearly likes him, doesn't she?"  I say as we reach the toilets.
Melissa only has to look at me for me to know that I'm completely right.
"Don't be too hard on her.  She's been finding it extremely hard to get over him since New Year's.  She's always had a crush on him, but it got much much worse after they slept together.  As you can probably imagine,"
I'm standing there by the cubicles in shock, a Reiss dress in one hand and a River Island one in the other.  My heart has stopped beating - of this I am sure, and the red wine has seeped through to my nude tights.  I look like I've been shot.
No.
I feel like I've been shot.
"Are you OK?"  Melissa asks.
"Aha," I manage to mouth.
"Oh," she says, edging back a little, "He hasn't told you?"
"Nope,"
"Oh,"
Oh, indeed!

I walk out of the toilets in the Reiss dress and sit back down as if nothing has happened.
"Ooo, this dress is lovely," Liz says.
"Well, refrain from spilling wine onto it," I retort.  She sneers and throws a look towards Malcolm.
"What's the matter?" he whispers in my ear.  "Liz is only trying to be nice,"
"She doesn't want to be nice to me," I whisper back.
"What?"
"She wants to be nice to you,"
"Have you somehow absorbed that wine?"
"I asked you if you two had history.  You said no.  You lied,"
He says nothing.  Just stares at me for a while, before turning his attention to the stage just as the cast are about to sing 'A Fine Romance'.
Posted by Unknown at 8:58 pm