I wipe the thick cream off my nose with my thumb as I put down the cappuccino.  Mikey looks at me across the small, round, mahogany table and asks, "Plan of action?"
Well, there isn't one.  But I don't want to tell him this.  I have a feeling he'll walk out of the cafe dramatically and get the next train back to Surrey, probably mouthing, "Why do I let her drag me into these situations?"
"My plan is to buy a boat," I announce.  I hear him huff, settle down his tea and cast his eyes towards me angrily.
"You can't buy a boat!"
"Why not?"
"You're 17.  You don't know how to operate one.  You have nowhere to keep it..."
I'm about to bring up the whole 'I live near the Thames.  I can see a bit of the river from my bedroom window' argument again, but I know it'll only fall on deaf ears.
"...you can barely look after yourself.  I mean, you thought an umpire was the plural of empire..."
Anyone would have made that mistake.
"...you get bored easily and by next week the boat will be forgotten and you'll want your own theme park or something..."
I mentally make a note of the theme park idea.  I did always have expansion plans for Thorpe Park.
"....you have exams coming up and need to concentrate on those - not learn to drive a bloody boat.  By September you're moving to Guildford..."
There's a river there too, you know.
"...you're only doing this to prove something to Jamie because the two of you broke up last night.  You're hurt and you're not thinking straight..."
My heart sinks a little as I think of Jamie.
"...and most importantly, boats are expensive.  You don't have a job.  You don't have any money.  Your purse contains £3.62 and a chocolate button!"
I look up at him awkwardly, "Actually, I ate the chocolate button,"
He shakes his head and I immediately feel like this is a scene from Will and Grace.  "Why am I not surprised!" he drinks his tea.
"Well, there's no harm in looking at the Marina," I tell him.  "We came all the way to Brighton.  We can't spend the entire day in Starbucks,"
"Fine," he says drinking the rest of his tea.  "Maybe we'll get lucky and find a boat for under £3.62,"

It's raining.  Heavily.  The large chunks of water droplets are propelling themselves towards us with maximum force, and as we make the short walk from the cafe to the boats, we are completely soaked.  We might as well have jumped in the sea and hijacked a boat from there.  That way, at least I saved my £3.62.

"I'm concerned," Mikey says as he uses his jacket as an umbrella to protect his perfectly styled, blond hair.
"What concerns you, my lovely?"
"Number one, your mental health, obviously,"
"Obviously,"
"But number two, isn't that Giles over there?"
My head darts in the direction that Mikey's finger is pointing to.  There, on the other end of the marina stands Giles.
"What's he doing here?" I whisper, despite the fact that he's completely out of earshot.
"I have no idea, but he can't see me here.  He'll only tell my mum that I'm in Brighton.  And let's face it, she'll take one look at my CD collection, put 2 and 2 together and be upset that I haven't come out to her yet,"
"You're over-reacting.  He's only a distant cousin anyway,"
"His mother and my mother are sisters!"
"Ah,"
"My mum's going to think I'm gay!"  He starts rubbing his temples as the rain ruins his hair.
"I'm sure she's guessed by now.  I mean, she has met you,"
"Do you think you're helping?"
"No?"
"No.  No, you're not!" and the jacket is thrown back over his head.

Giles on his own would have been fine, but it was the appearance of Kate a few minutes later that really jolted us.  She was wearing a white summer dress, despite the awful weather, and was making her way to the little boat shop that Giles had now entered.
"Let's go in," I tell Mikey making a move for the entrance.  But he grabs my jacket and pulls me back.
"Why?"
"To find out what they're doing here,"
He starts shaking his head as if unable to comprehend," Why??" he says again.
"Aren't you at all curious why they're in Brighton? Mikey, this is Kate, Jamie's psycho ex.  We have to know what her and Giles are up to,"
Mikey appears to be understanding me a little more now.
"It's very strange," I continue, "who comes to Brighton unexpectedly?"
He eyes me up and down and I can tell he's seconds away from going on another rant of how I've gone insane, how I'm such a child, blah blah blah.
"Our situation is different," I tell him before he gets the chance to start shouting, "We are here to buy a boat,"
"They'll see us if we go in there.  That place looks tiny,"
"Not if we're very careful,"
"But -,"  I sometimes have no idea why Mikey argues back so much.  He knows this is happening whether he likes it or not.  You'd have thought he's learnt his lesson by now.
He huffs and stomps his feet as he follows me towards the shop.

Kate and Giles are at the till talking to an old, weather-beaten man who looks ridiculously like Captain Birdseye.  So Mikey and I head to the other end just behind a pillar, where posters of cruise ship holidays have been scattered messily all over the wall.  Luckily, we can hear every word.
"I've been thinking of taking my girlfriend on a long holiday this summer," I hear Giles explain.
Yes, please take her.  Take her far, far away.  And lose her.  Please, try your best to get her kidnapped by pirates.  She's nothing special so the ransom request won't be very much.
"Maybe Antigua.  A lovely sailing holiday around there would be splendid," Captain Birdseye suggests.  I hear Kate giggle at the thought like a child.  "When are you two lovebirds thinking of leaving?"
"Beginning of July," Giles responds.
"But we'll definitely have to come back late September for university," Kate puts in.
I'm reminded of Jamie again and how he'll be at Edinburgh with Kate in Autumn.  My heart sinks a little more.
"I'm really looking forward to uni, you know," she tells Giles excitedly, and I don't know how - perhaps because I've learnt Kate's mental thought process so well these last few months - but I know she's only suddenly excited because Jamie will now be there too.
"I'll come and visit you all the time," Giles says.
"Yes," she says straight away, lacking enthusiasm.
There's deep silence for a few minutes as Captain Birdseye hands out a few leaflets and brochures about upcoming sailing holidays.  We hear a few "Ooo, that looks lovely" and "How about this one, babe?" but nothing interesting is really happening.  I'm beginning to regret following them in here.  I could have bought my boat by now.  And this wall is getting dull.  I've read "Cruise through four seasons in four weeks for just £99" thirteen times now.
"I'll leave you to read those through.  I'll just be in there if you need me," Captain Birdseye tells them before entering a hidden away room at the back.
"I love the look of this one.  We should go for it," Giles confirms to Kate.  We hear him waving a brochure about.
"Oh, but that's until mid October,"
"I know, but term doesn't start properly until then, so you'll only miss Fresher's Week,"
"No, no!  I don't want to miss anything.  I want to get to Edinburgh as soon as I can!" she snaps.  Uh oh, I can feel the Bunny Boiler Richter Scale starting to increase a little.
"I know, babe, but this is a great deal and it would be a shame to miss it,"
"I'm going to Edinburgh when I'm supposed to, not when it suits you!!  Do you understand?" she shouts at him.  Loudly.  Captain Birdseye emerges from his retreat.
"A problem?" he asks.
"Oh, nothing.  Sorry about that," Giles smiles and apologises, so he hides back in his room.  He turns to Kate in a soothing tone, "At least think about it, babe,"
"I don't need to think about it!! This relationship won't last until then anyway!!!" she screams.  "Erggh! I can't even believe it's lasted this long!"
"Umm...what?" Giles sounds hurt.
"I only got with you to make Jamie jealous.  I expected him to come crawling back to me weeks ago, but he's still with that bitch!"
I'm about to go and strangle her, but Mikey holds on to me.  "Stay calm," he whispers.
"But now that Jamie's going to Edinburgh as well, Ella won't be around and it will be so much easier to make him mine again," she says this like she's so proud with herself.
"Oh," he's practically whispering.
"So I probably won't go on this holiday anyway.  Now that I think about it, it's just time wasted in not trying to win Jamie back,"
Die!
Die Die Die!
Seconds later we hear the bell above the front door jingle.  Giles has stormed out.  Kate sets down the brochures and walks out calmly into the heavy rain.
"Bloody hell," I say to Mikey.
"I can't believe that," he responds, his mouth wide open from the shock.  "I honestly thought she'd caught the bait properly when we set her up with Giles,"
I look around the shop again wondering what my next step should be.  Do I tell Jamie about this?  Will he even believe me?  He'll just think it's some sort of way of getting him to stay in Surrey rather than move to Scotland.
"What are you going to do now?" Mikey asks me, but there's no time to reply because Captain Birdseye has emerged again and is smiling at us.
"Can I help you with anything?" he asks. 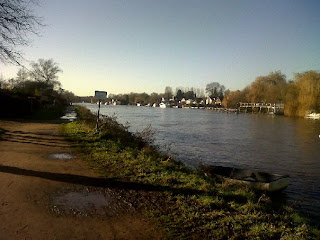 "Do you sell boats?" I reply without even thinking.
"We do,"
"Roughly how much is your average one?"
"Well, they range from a few thousands to a few hundred.  Our cheapest rowing boat is £150,"
"I'll take it,"
Queue gasp from Mikey.
"It's a little more costly if we have to deliver it,"
"That's not a problem.  I still want it,"
"Wonderful,"
I can sense Mikey wants to shout at me so I walk a little bit away from him and get out my phone.  Before I have a chance to change my mind, I start typing: 'I told you I was going to buy a boat!' and off the message flies to Jamie.
Posted by Unknown at 3:55 pm