It was just a smile.  One innocent smile to the blond-haired Greek God standing on the other side of the shop.  He had a name badge - now, I'm no intelligence expert, but my powers of deduction came to the conclusion that he must work here.
But, I must stop this 'across the shop' smile flirting because this guy looks eighteen; twenty if I'm having a super lucky day today, and considering I shall be 23 in a couple of months, add the fact that I'm snobbishly old-fashioned about this sort of thing, it is definitely a no-go zone.
He's amazingly attractive though - and the smiles escape me without me being able to do anything about them.  He's tall, with energetic blue eyes, and a body which right that moment I was imagining completely naked.
Uh oh!  What if he's sixteen? ...If he is, ignore that last bit.

"I'm definitely buying this," Little Brother says coming out of the fitting rooms.  He smiles at me - that same smile I often have plastered on my face whenever I want a favour from someone.
"You want me to buy this for you, don't you," I say as unenthusiastically as I can possibly muster.
He nods his head.
"Fine!"  I say, taking the rugby shirt from his hand and walking up to the till.  Little Brother has now moved to the next shop.  The selfish idiot.
"Hi," the Greek God sings.
"Hello,"
He runs the item through the till, occasionally flicking his eyes my way with a smile.  But he stops before he hands me my purchase, rips the edge of some green tissue paper and scribbles something down.  He pushes it across the table right in front of me.  Without saying a word, he hands me the carrier bag, followed by the receipt and nonchalantly walks away.  There, on the emerald scrunched up paper is his name and his number.
I feel like a teenager, which makes me wonder whether he is one. 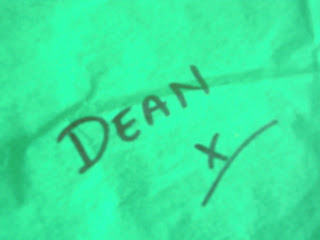 I have no intention of calling him - I rarely go on dates with absolute strangers (that may be a lie...), and all I know about this guy is that his name is Dean, occupation: Sales Assistant, age: Unknown.  Hardly the start of a fairy-tale romance.
And, I've only just come out of an incredibly short, but awful relationship (read all about it at No Knight In Shining Armour).  Getting involved with someone else isn't the best idea, despite my friend's attempts at "getting me back on the horse".

The next day, however,  I'm finding myself typing him a text and before I know it, a date has been arranged and I'm on my way to Kingston (upon Thames) to see him.
"You should have asked to meet at a pub," my friend had said to me earlier that day.
"Why?"
"Because then you'd know if he's over eighteen or not,"  Oh!  That would have been a clever idea.  I'll keep it in mind for the next teenage looking boy I date.

I walk in the restaurant and immediately spot him sitting down on a table by the window.  He's wearing a white shirt and smart trousers, but he looks a bit like a young estate agent who hasn't managed to see a tailor yet.  And his hair is so...blond.  Imagine a fair-haired cherub that has grown into a dashing Cupid.  That's Dean.
He's 17.
"You look amazing," he tells me kissing my cheek.
He's 25.
"Thank you," I reply.  "I hope you haven't been waiting long,"
"Barely five minutes," he smiles broadly at me like a perfect gentleman.
He's 27.
"Let's get some drinks in.  Red or white?"
He's definitely over 18...unless he means fruit squash!
"Red," I reply cautiously, so he calls over the waiter and tells him the order.  Thankfully he really did mean wine.
He's definitely over 18. Phew!

Half an hour into the date and I'm laughing hysterically.  This guy is hilarious.  His sense of humour isn't like any I have ever encountered before.  He's confident, energetic, mature...
He's 24.
"And after that he couldn't exactly show his face here again.  Decided to go to university last October," he finishes off talking about his best friend from the school days.
He's 18.
"So are you at university?" he asks me, eyes engaged on my lips as I stumble with an answer.
"Umm...actually I graduated last year," I inform him.  But oddly his smile doesn't fade.  His reaction seems...normal.
He's 22.
"University was never for me.  I wanted to get a job, find a nice girl and get on with my life," he drawls.
He's 30?
"Are you enjoying work?" I ask him thinking back to the day we met.
He shrugs his shoulders and scrunches his nose, "S'alright," he says, "It's my first job, so it can only get better from here,"
OMG, he's 16!!!
"Oh," is all I manage, hiding the disappointed look on my face by drinking more wine.
"Maybe another year there, and then I'll look for something more serious.  An office job like all other grown-ups," he smiles.
...Are you a grown-up?
"It's just a difficult time at the moment.  I have so many unemployed friends that have finished uni,"
He's 21.
He smiles again, "There's still time.  I'm young,"
How young???
"So did you do A-levels?" I carefully ask, hoping this will give me a better indication.
"Last year," he replies.
He's 19.
"My last exam was on my nineteenth birthday, so I'll never forget that bloody paper," he jokes.
I quickly do some adding up.
He's 19.
He's definitely 19.
I'm not too sure how I feel about this...

We're now by the Thames riverbank just outside the Italian restaurant.  He asks me if I'm cold and immediately takes his coat off.
"It's honestly OK," I refuse and we both stare out at the boats, which are bobbing up and down on the rumbled river.
I can feel him move closer.  This surrounding is perfect for a first kiss; the night air is crisp, the crescent moon keeps peeking out of clouds, and the river sparkles like gold next to the street lamps.
But I don't want a kiss.
Not from a nineteen year old, anyway.
"Best get going," I tell him, immediately edging my head back when he leans in.  I have probably crushed him - from this moment on he'll have relationship issues.
"OK," he says, almost as if he thinks he's done something wrong.  But all I do is smile at him, get in a cab and run away.

"If you're going to arrange a second date, better do it before half term ends," Mikey (from Bunny Boiler fame) tells me when I call him on the way back.
"Stop it with the jokes," I scold.  "He's already sent me a text telling me he's had a lovely time,"
"I'm surprised his mother lets him have a mobile at his age," I hear him giggle at the other end of the line.
"Don't joke, Mikey.  The guy looked really broken when I avoided the kiss," I shudder at the recollection.
"If you like, you can pass on some of my nephew's toys.  Maybe that will cheer him up?"
Har!  Har!
Posted by Unknown at 5:07 pm