I think I've been a bit unfair on my date stories. So far I have only told the tales of the bad dates where it has been down purely to the guy. But the truth is that us girls are sometimes at fault too, and believe me I have a few tales of my utter stupidity also.
It's been a dull day. Well, actually it's been a dull week. I'm still awaiting job interviews and am in the midst of application forms, but nothing has really occurred yet. My lazy Summer days are being spent parading up and down my local High Street hopping from cafe to cafe to swot up on marketing. But there's only so much of 'Marketing for Dummies' that a girl can read and once I've finished my 6th latte of that particular hour, I put my book down and gaze dreamily out of the window. I'm not too sure what exactly I'm thinking about, but the next thing I notice is a tall, handsome guy with piercing grey eyes and brown hair who was towering over me.
"May I sit here?" he points at the comfy sofa opposite me. I feel guilty for taking up a table with 3 armchairs plus a sofa when I'm not expecting anyone.
"Yes, of course," I reply, eyeing him up and down when he's not looking.
He sits down, sipping at his coffee and reading The Times. I'm now pretending to read my book once again, but I'm paying no attention to it. Instead my eyes are transfixed on this beautiful man. I'm not being very subtle. Every time his eyes rise up and meet mine, I turn my head quickly the other way. Let's face it - it's pretty obvious.
"Is something wrong?" he asks me, a gentle smile announcing itself.
"Nothing at all. I'm just looking out of the window," I say defensively and glare out of the window behind him. The only thing of interest is a bald man dragging a disobedient dog.  He turns his head to be greeted with the man who is now shouting at the little Labrador. "Come on, Earnie," we hear, and immediately both burst into laughter.
"I'm Tom," he says reaching out a tanned hand towards me. I smile sweetly and introduce myself. For the next hour we really get to know each other and already he's announced that he wants to see me again.
"When?" I say, perhaps a little too eagerly.
With a laugh Tom says, "Tonight?"
"Tonight. Hmm, what am I doing tonight? ...tonight," I say as if I'm really thinking about it, trying desperately not to sound that interested. "I think I'm free tonight,"
I thank my lucky stars that my week has finally got interesting. Tom is perfect!! He's gorgeous, interesting, funny and incredibly smart, and for the rest of the day I'm completely buzzing and far too excited to see him again. I'm so excited in fact that I've forgotten to eat. Instead, the remainder of the day has been spent going into London and choosing the perfect outfit.
I've opted for a pale pink Topshop mini dress and am making my way to Giraffe, the restaurant that Tom and I agreed to meet at. He's already there, sitting on a table outside enjoying the setting sun that's dipping behind the buildings.
"Hello," he stands up to greet me.
"Hi. I hope you haven't been waiting long," I say and he immediately dismissed it with a 'not long' but looking at the almost empty pint of beer in front of him I can see he's been here a while. 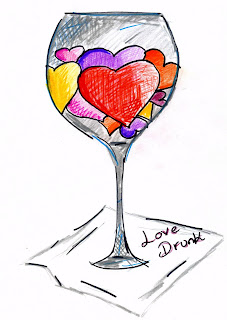 Am I late? I question myself as I look at my phone to check the time.
"I thought that perhaps we could sit out here and have a few drinks first before dinner," he explains and sits back down ordering the waiter to bring a menu.
I scan the cocktail menu once it's been handed to me and order a mojito. Tom begins to tell me more about himself and the conversation flows for about an hour. In this one hour I've ordered 5 cocktails, and now standing up to go inside for dinner I can already feel my tipsy head swooning and making everything just that little bit dizzy.
The fact that I haven't eaten anything all day has not helped.
"Can we get a bottle of wine as well," Tom calls out after the waiter who soon returns and tops my glass quite generously.
Oh no.
"So tell me something else about yourself," Tom starts.
I think about this - probably a little longer than I should and begin to tell him my entire life story. It starts with my first memomy of putting on red lipstick all over my face when I was three, and ends with that funny squirrel I saw in London earlier that day.  My slurry words are already showing evidence that I have had more than enough alcohol.
"Are you alright?" he finally asks.
"Yeah, perfectly happy, thanks," I say with a big smile, but Tom looks dubious. He's already began to edge the bottle of wine away from me.
Even with food inside me, my drunkenness does not seem to shy away anytime soon. In fact, it's probably been made worse with the occasional gulp of wine after each bite. Let's face it, I'm well and truly trolleyd.
"Can I get you any desserts or coffee?" the friendly waiter asks after the meal. I'm about to shake my head (not exactly shake, more waddle it) but Tom speaks immediately.
"Black coffee," he says looking at the waiter and then at me.
Oh, come on. I'm not that drunk...am I?
The waiter places the black coffee in front of Tom, smiles and walks away. The coffee cup just stays there with no one touching it. I'm a little confused at this point - since this is meant for me should I reach over and take it?  Hmm, very puzzling. I'll wait a little and then decide.
4 minutes later Tom is still talking, but the coffee has remained untouched. I should probably just reach out and take it. After all, he did order it to sober me up.
"Excuse me," I say politely and move Tom's arms out of the way. Slowly, I drag the cup of coffee towards me and take a sip. The talking has now stopped and Tom is staring with a stern look as he watches me drink. "Yummy," I say aloud and beam another smile his way.
But he doesn't smile back. He gets the attention of a nearby waitress and asks for the bill. In utter silence, he pays for the entire meal and we walk out.
"How are you getting home?" he asks.
"I'll walk," I reply, expecting him to offer a lift.
"Ok, I'll call you," he calls out, now about 10 steps ahead of me, with heavy strides making his way to the distance.
...That coffee wasn't meant for me, was it?
He never did call.
Posted by Unknown at 1:45 pm