"Have you met George?" my friend turned to me and said as she introduced me to her older cousin.
"I don't think I have.  I'm Ella," I replied with a friendly smile and reached out my hand to shake his.
George was tall, with surf style blond hair swept across his forehead just about covering his eyes. Even though this was meant to be a semi-formal birthday party, he was dressed in a white t-shirt, scruffy jeans and had teamed this outfit with an old pair of flip flops. He certainly stood out among the pretty dresses, bow ties and black suits, but had this amazingly charming, charismatic personality that it really didn't matter that he looked like he'd hitchhiked his way there.
We got on straight away, had many things in common and I left the evening feeling like I had made a brilliant friend. I was so excited when he texted me the next day saying, 'awesome band are playing a private gig tonight. Wanne come?' Great, I thought so headed out that night.
The band had hired out a bar for the night and invited all their close friends. The atmosphere was great; the sound of the music started thumping its way through me as I walked in, the hazy blue and green spotlights spinning from the ceiling caught the attention of glitzy mini skirts girls were wearing and made them sparkle. Barmen were creating extravagant cocktails, and in one corner a champagne bottle was opened causing a few girls to scream with laughter.
This whole place looked like some scene out of Gossip Girl, and yet I was there standing in a blue vest top and a denim skirt. Oh dear, it looked like this time I was the one under-dressed.
It didn't really matter though. Everyone was so incredibly friendly and George made sure he never left my side so that I didn't feel out of place being surrounded by so many strangers. I was having an AMAZING time and almost felt bad when the music stopped and everyone had to march out (well, most were stumbling out) at 2am. 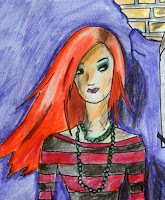 "Let's go for a walk and find a burger place," George said. We walked for a while getting to know each other a bit better. He made so many jokes and had me laughing the whole way. This guy was great! Considerate, charming, funny - the ideal friend.
We found a bench nearby and sat down eating our chips, scanning the silent surrounding (and a kebab place) and occasionally smiling at each other.
"I had a great time tonight," I informed him. "Really happy I met you," I continue to say innocently and give him a friendly nudge with my arm. The next thing I know my chips have now fallen on the floor and he has lent in closer. It takes my brain a couple of seconds to register this action as an 'oh, he wants to kiss me', and immediately my first reaction is to move my head back. Unfortunately I moved my head back rather too quickly, not realising that there was a brick wall behind me.
Now, normally in a situation like this one's head would move back away from the person trying to kiss them, and then they would immediately reassure the person by apologising, or pretending that they didn't realise they were about to be kissed... you know, that sort of thing. But I had just whacked my head on a brick wall and saying sorry to George was pretty much the last thing on my mind. In fact, for a few seconds I forgot George was even there. The pain was agonising and amongst all the swearing I think I finally managed an, "I'm sorry,"
"You moved away," he confirmed as if I'd forgotten. "But we're on a date! Isn't a date supposed to finish with a kiss?"
Ah!! Here's our little problem.
"This was a date?" I asked a little dumbfounded still holding my head.
"Well, yes! I asked you to go to a gig with me,"
"I thought we were going as friends," I'm still puzzled. Had I missed something here? At what point had he actually asked me out?
"We got on so well last night. You gave me your number. We hit it off straight away. Obviously the next step would have been us seeing each other again," he lists these things as if he's teaching me the rules of dating.
"I thought we were just friends. I'm sorry, I didn't really catch on to it," I said whilst wiping ketchup off my skirt.
The thing is that I should have seen George was rather embarrassed and should have apologised and left things at that. But that hit on the head had quite clearly given me some form of brain damage and after everything that George said, I kept retaliating, saying that I only saw him as a friend and he was an idiot for trying to kiss me.
"You gave me your number!!" he kept repeating, rather angry at this point.
"Rachel also has my number. It doesn't mean we should be arranging a date!" I retort.
"How could you not have realised this was a date???" he continues.
"You're so stupid. If you'd asked me out properly I would have realised this was a date. Sending someone a text asking them to a gig is quite clearly a 'friends' thing." I argue back.
It's now 4am. It's absolutely freezing, chips have been thrown all over the place and the two kebab van men have stopped their work and are watching us. We argue it out for quite a bit until we realise that it's late and we should be going home.
It's been pretty awful but I want to end it on a good note. He decided to call me a taxi and goes over the to kebab van to see if they know of a taxi company.
"Got the number for a taxi," he says when he comes back.
"Great. So when are you and the taxi driver going on a date?" I say hoping he will see the funny side.
He doesn't.
Posted by Unknown at 10:14 pm