If you can't be with him, be Cupid

I have to admit that I'm rather a nice girl.  I have never pushed my way through just to get what I want, nor have I ever hurt someone on purpose just because they were standing in the way to where I wanted to get to.
But.
Although this 'diplomatic' approach wins you friends and makes you trustworthy and loved, it does hurt someone.
You.
I adore being 'the nice girl' - I wouldn't have it any other way, but in retrospect I've noticed that whilst I try to help others, I seriously damage myself in the process.  I'm not saying that I condone selfishness, but in some cases it does have its advantages.
Let me explain...
I was half an hour late for work.  This was insanely bad especially since that day a selected few of us were supposed to be going to a conference in the outskirts of London.  Which meant that when I finally arrived at my place of work, everyone was standing outside next to the taxis, arms crossed and tapping their feet impatiently.
"I'm SO sorry," I say running towards everyone.  "It's a long story which involves my landlady, a spatula and an electric toothbrush," I stop speaking to take in some air, "I know that's no excuse but I'm really really really sorry,"  I smile angelically hoping I'll still be entitled to a Christmas bonus.
"That sounds like a perfectly legitimate excuse," Luke mocks with a lopsided smile.
I melt as I see him.
Let me introduce you to Luke.  Hmm, where do I begin?  Well, he's perfect.  And that's pretty much the end of the story too.  You ask any girl in the office to describe Luke and it all begins with a girly 'far off look into the distance' sigh followed by "He's yummy," and ending with, "He's coming this way.  Don't make it look obvious that we're staring!"
I can safely say that I had been in love with Luke for about three months. (And yes, at the time I did think it was proper love.  I even had Mrs Luke Heath written on occasional post-it notes hidden in folders).  Three lovely months of work being a joy to come into every day.  Three lovely months of having the most envied desk in the world - it was right opposite his - and three lovely months of having no confidence or courage whatsoever to ask him out.
Hannah dragged me into a taxi with her without me even getting a chance to catch my breath from my little sprint.
"In here, now!" she yells at me, her surprisingly strong arm pulling me towards the vehicle.
"What are you doing?" I ask once I'm seated.
Hannah's face turns into a childish grin.  She's slapping her hands against her legs and is jumping up and down on her seat like a giddy teenager.
"Do you need the loo?" I ask cautiously.  She ignores me with a wave of her hand and a look on her face that says "Stop being silly".
"I think Luke might like me," she says.  The words don't register straight away so for about three seconds I just stare at her with a blank look.  But once they're finally digested...I still stare at her with a blank look.
"Umm...what?" I ask, unsure as of what to do.  I desperately don't want her to know that I may have planned the names of my future children with this man.
"Last night at work after you left, Donna was joking around about 'office crushes' and Luke said that when he first started working here he liked three girls," she jumps up and down in her seat again, her black, short hair static now.  "He said," she pauses and swallows followed by an enormous grin, "that he liked Natalie for a bit, Faye and ME," she then starts clapping like some hyperactive seal.
My heart sinks a little when I hear that I'm not on his list.
But then I realise that I started working here after he did so instantly this makes me feel a teeny bit better.
"I just really like him," Hannah continues.  I follow her gaze out the window where we see Luke walking past us and getting into the other taxi.  He flashes a smile our way and I capture it, even though I now know it's all lost hope.  I look over at Hannah who is still looking out of the window despite the fact that he is nowhere in view.
"I really like him," she repeats again with a hazy smile.  It's almost a hurtful smile - as if she likes him so much that her life would shatter without him.
Oh dear.
I may have planned my wedding with this man, but Hannah has probably already booked the church.
The taxi starts moving and I stare out, seeing London roll by.
"You have to help me get him," she demands like she's starved for so long.  "You're good at all this manipulation stuff,"
"Manipulation?!?" I shockingly reply.
"Persuasion," she corrects herself.  "I meant persuasion,"
But somehow I don't believe her. 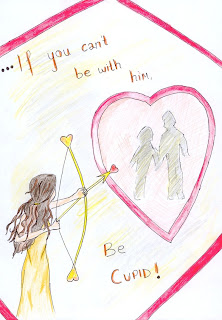